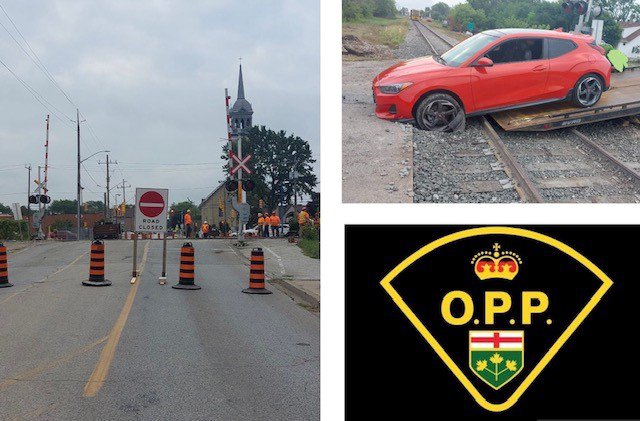 Ever wonder what happens if the police catch you driving on a closed road?

A driver in Tecumseh, Ont. just found out.

The Ontario Provincial Police recently posted a message on Facebook reminding drivers when a road is closed for construction or other purposes, there is a reason. The post included photos showing a damaged vehicle resting on railway tracks.

“There are potential hazards, and it is not safe to pass through that area, even more important is the safety of the workers. In this case the driver damaged their vehicle,” the OPP stated. “Always be alert while driving.”

In the Tecumseh incident, the driver was issued a Provincial offence notice for: Drive on Closed Highway under the Highway Traffic Act. The fine payable for driving on a closed highway is $110 and, upon conviction, three demerit points are added to the motorist’s driving record.

Aside from the fines. It also leaves the driver vulnerable.

Your insurance provider may not cover you for vehicle damage or personal injury if you have chosen to ignore the law in this way. It could also result in increased insurance costs.

Construction season isn’t the only reason roads are closed. Accidents are another.

According to CBC News, Manitoulin OPP had set up a large "road closed" billboard sign on Highway 17 while police investigated a fatal crash in January 2020. The accident happened when a snow plow and a transport truck collided. Both drivers died as a result.

However, six people decided to ignore the closure sign. The OPP Tweeted about the fate of those drivers, all of whom were charged for driving on a closed highway under Section 134 of the Highway Traffic Act  .

"These were people that went around the sign to get by it,” Const. Marie Ford told the CBC at the time. “So, they would have clearly seen the sign, read that the road was closed and then circumnavigated to get back on to the highway."

According to Ford, the biggest concern police have when someone drives on a closed highway because of an accident is the safety of those investigating. This includes police officers, paramedics as well as tow truck operators, clean up crews or other people still at the scene.

"There may be somebody who is an officer taking measurements on a highway. ([The driver) may not see them. We obviously don't want anyone to get injured," Ford said.

Bottom line? Everyone realizes that road closures are an inconvenience, but police take them very seriously.