10 tips for avoiding an auto claim this winter 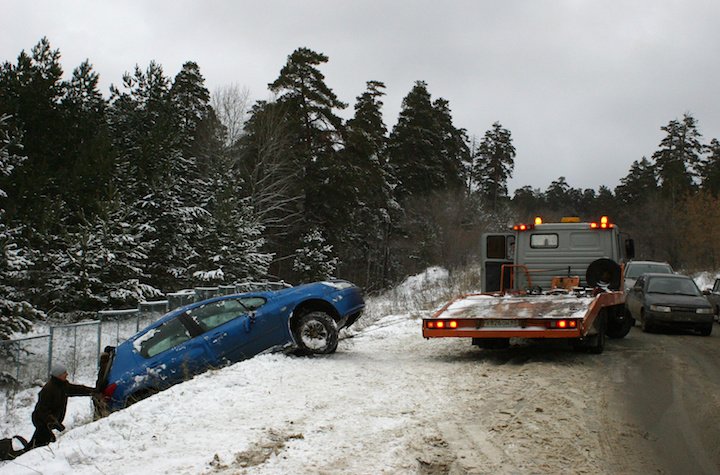 Winter is upon us again. Though it is a season full of festive joy, premier entertainment, and peak cosiness, it is also a deathtrap for auto insurance claims. Driving conditions deteriorate, and the roads morph into an entirely different beast—one that goads typically sound drivers into making fatal mistakes.

Still, just because winter stacks the deck against drivers, there's no reason it should necessitate a seasonal spike in auto insurance claims. Bringing an extra degree of care and attention to the driving process is all it takes to stay safe and avoiding the dreaded claim. Here's how to make that vision a reality.

This is how forming good winter driving habits begins. And all it takes is a one-time action! (Well, two if you count removing them at the end of the season). Using winter tires is really the best way to ensure that you're not putting yourself at a disadvantage when it comes to traction and protection from the elements. All-season and all-weather tires are named as if they could do the trick, but it's been proven that they aren't as effective. If you haven't gotten yours yet this year, then check out the contest that's currently happening at SmartCoverage. Get a quote and you'll be entered to win a $500 Canadian Tire gift card!

2. Have an ice scraper on hand

Having an ice scraper in your vehicle at all times is a simple, effective way to greatly reduce your chances of getting into an accident and needing to file a claim. You should never allow ice to build upon any of your windows or windshields. It is a major hazard that will distort your perception of the road and leave you unaware of critical oncoming or trailing factors. Always check before driving to see if ice has formed and then scrape it off if it has.

Defensive driving is defined in Safe Practices for Motor Vehicle Operations as "driving to save lives, time, and money, in spite of the conditions around you and the actions of others." There are many specific ways to do that—which we will get into below—but it all starts with having the right mindset. Make sure you adopt that mindset; it should always be the standard for driving, but it becomes even more indispensable in the winter.

Legally, you are allowed to go up to 10 km above the speed limit. However, just because you can do something, it doesn't mean you should. Winter is no time for pushing the boundaries of speed. Unless it becomes unseasonably warm and the roads are in pristine condition, it's best to drive at a slightly slower speed than you normally would. Not to a point where it's unsafe, but just enough that you maintain a reasonable flow.

5. Don't expect AWD to save you

A lot of people make the assumption of thinking that All-Wheel Drive (AWD) is going to make their cars less prone to crashes. This is patently untrue. The only ways in which AWD benefits drivers over other wheel systems is that it provides more traction on starts and tends to make cars speed up faster. It will not be more useful on a road with lots of icy patches. In fact, it could even be considered less useful, since it may cause vehicles to reach higher speeds prior to a loss of control. AWD is certainly not a winter safety blanket.

Believe it or not, your clothing can be a distraction when you're in the driver's seat. Garments that are either too warm or too restrictive will hinder your level of comfort behind the wheel. It's important to remember that even though a jacket makes you feel comfortable at the beginning of a ride, it may start to do the opposite once your car heats up past a certain point. You can fix that by pulling over, but it's better to just pick a plan that works at the beginning (garment(s) on or garment(s) off) and stick to it.

There is only one time where tailgating is appropriate, and that's right before sporting events. It should never be done between drivers on the roads—especially not during winter. The nastiness of winter roads amplifies the danger level of an already dangerous practice. If one car is driving closely behind another and the one in front loses control, it will almost certainly lead to a collision. You should leave slightly more space than usual and give yourself that extra buffer, not to mention taking it slow as you approach other vehicles at intersections.

8. Learn how to control skids

Nobody except driving aficionados really wants to spend time learning how to control potential skids, but it's a lesson that could prove to be well worth the effort. Skids happen all the time and in all sorts of different ways. Most of them are minor, but it's that one elusive major you want to be prepared for. Look into the various scenarios (wheel lockup, fishtailing, oversteer, etc.) and see how your car is equipped to best handle them.

9. Stay away from bad roads

This is just common sense. If you know that a road is either notoriously bad for winter driving or has been made temporarily worse for some reason, then just stay away! Stay informed by news alerts whenever they come up and take the initiative to take stock of things yourself. If a street is constantly being neglected by snow removal crews, then take an alternate route. It's better to play it safe than to find yourself making a claim because you made a bad choice.

Most winter auto claims result from problems that occur while driving, but it's equally possible to need one because of something that happened to the car while it was in stationary mode. Storms can wreak all sorts of havoc on cars. They can bombard them with snow and ice, cause a tree to come crashing down on them, etc. Park your car indoors if you have that option and if not, do your best to mitigate possible exposure hazards.